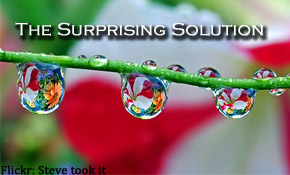 Two thoughts came to mind before I even got through the Forward and Introduction sections of The Surprising Solution: Creating Possibility in a Swift and Severe World by Bruce Piasecki.

1. Is this book is going to be preaching to the choir about addressing environmental and social issues? Will it be a studied treatment of the issues or a piece of propaganda?

2. It takes a bold author to first thank the Forward writer Darryl Vernon Poole for comparing him to Rachel Carson and Malcolm Gladwell. Then, proceed to compare himself to George Orwell. If he’s that good I need to read on.

This book is the latest update of a book called World Inc. (2007) which has received significant acclaim. And, as president and founder of the American Hazard Control Group, Dr. Piasecki has been consulting with major corporations on environmental corporate strategy since 1981. So his opinions are worth hearing, worth reading.

He contends that today’s businesses must take responsibility for leading in the areas of social and environmental reform.

You can almost hear businesses asking, “What’s in it for us?” And Dr. Piasecki has an answer for them. He explains how responding to social needs will open markets, generate profits, and win investment capital. The examples he profiles in this book are from consulting he has provided to clients like Toyota, Suncor Energy and Hewlett-Packard.

Dr. Piasecki is very pro-capitalism. He just sees the need for capitalism to change, saying that traditional capitalism may be getting a bit senile. He believes that both corporations and individuals will need to adjust their bearing in a new terrain. Competing on price and quality alone are not sufficient anymore. Businesses, large and small, must also put social needs into the equation.

He talks about The S Frontier which he observes is already here. It includes the severity of market conditions, the swiftness of information, and social response to capitalism. And according to Dr. Piasecki, if companies don’t adjust, he predicts that the top 300 multinational companies will undergo tremendous change, and only a minority will be in business a few decades from now.

This is a surprising book because the radical changes Dr. Piasecki describes actually grow out of strong business fundamentals. It’s an uplifting book that defines the future of leadership. And the arrogance that seemed to jump out of the book before the first chapter may be justified based on the thinking the book advances.

Interview was conducted by Jay Liebenguth

While pundits and experts are churning out a plethora of books analyzing the causes of the 2008 economic crisis, it’s refreshing to find a practical book that provides some good thinking on how to manage for success in crisis situations. In his new book, “7 Lessons for Leading in Crisis,” Harvard Business School Professor and[Continue Reading]

At all levels of government and at most dinner tables, the high cost of energy and the options possible from the renewable sources of solar and wind are familiar conversations.  The change in recent years, however, is those conversations have become increasingly the focus of policy and action, not just topics conjecture and speculation.

You and I fret over how to balance our investment dollars in a SEP or an IRA. Meanwhile, Robert P. Smith has his bags packed for Damascus, Syria to measure that country’s investment potential. That’s why he is portrayed as the “Indiana Jones” of international finance. “Give me a country that is at war because[Continue Reading]

Even during the best of times, small businesses in America represent the majority of all new U.S. job growth.  In fact according to the Small Business Administration, most net job loss occurs within firms that are greater than 500 employees. In a recent Fox News Sunday interview, Steve Odland, Chairman and CEO Office Depot, told[Continue Reading]